Lessons from My Handbag

This morning, a series of unfortunate events meant that I was running slightly late for my first lesson of the day at local Chinese restaurant, The Great Wall, with my pre-intermediate class. As I slid my way down the unevenly gritted street I realised that I had forgotten to pack my planned lesson. Not having time to turn back, I spent the next five minutes composing a mental inventory of what I knew to be in my handbag and planning some resource lite activities. Here they are...

The possibilities here are endless, and your learners can join in the fun with their own phones!

Today I asked my learners to talk about a typical day in their lives. We brainstormed lexis for a few moments, and then a volunteer spoke on this subject for a few moments. This was recorded onto her (and my) phone using the voice recorder facility. We listened to the recording together, pausing it at intervals to reformulate some utterances, and asking other learners for their feedback and suggestions. Then the learner spoke again on the same subject, having taken this advice on board.

I think that asking learners to listen critically to themselves can be an extremely beneficial way of developing learners' lexical and phonological awareness, although it is important to set up an encouraging and positive atmosphere to neutralise any nerves.

I am never without my pack of playing cards.  They are an excellent addition to any teacher's portable tool kit. One of my all time favourite activities is Lindsay Clandfield's The Deck of Conversations. http://www.onestopenglish.com/skills/speaking/lesson-plans/pdf-content/speaking-skills-lesson-plans-the-deck-of-conversations-worksheet/teachers-notes-pre-in

This excellent lesson can be moderated and adapted on the spot to suit most contexts and levels.

I remove cards two to eight from each suit of the deck. With a lower intermediate class I might write the following, depending on what language areas we've covered recently. It  works best with small groups!

Learners then take turns to pick cards from the deck, talking about whatever subject matches the card they have selected. This makes for a really nice speaking activity and can be as long or as short as you wish it to be.

How rich a resource this is will really depend on how disorganised and untidy you are. I am incredibly messy and therefore my handbag is usually a veritable treasure trove of crumpled receipts, snacks, sea shells and partially decomposing fruit.

If you have enough handbag/pocket lint to share around there is a fun and challenging activity you can do with upper intermediate levels which practises lexis related to describing size and textures.

You can use photographs in your wallet to teach appearance and family vocabulary. If learners don't have photos in their wallets, they are likely to have some on their phones: perfect for generating discussion.

Posted by Genevieve White at 11:07 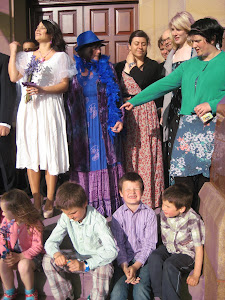 Genevieve White
I am an ESOL teacher living in the Shetland Islands and working in a community education centre for adult learners. I am interested in almost everything to do with English Language Teaching, but am particularly keen on resource design and creative and learner centred approaches in ELT. I use this blog to reflect on my teaching and to share ideas and resources. All views expressed here are my own.